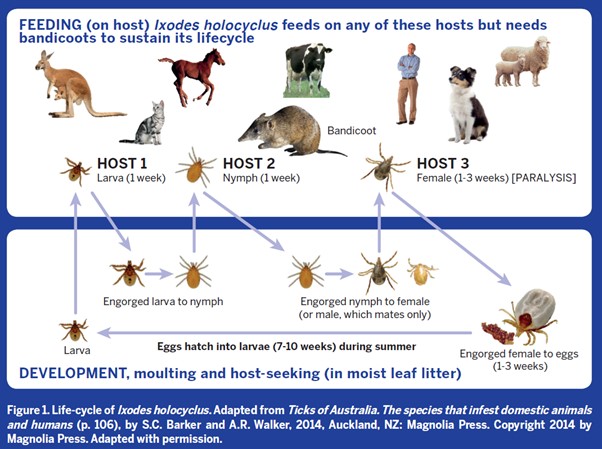 Depending where in the country you work, you and your customers may considerticks a mortal enemy to be loathed and feared, or little more than a nuisance.Along the eastern seaboard, from Cape York in the north to Lakes Entrance inthe south, the impact of ticks is readily apparent, with tens of thousands ofdogs and cats affected every year by paralysis ticks.1 Even in areas outsideof this traditional range, the eastern paralysis tick ( Ixodes holocyclus )makes her impact felt (and yes it is a her – paralysis is associated withfeeding adult females) with recent research reporting cases in the greaterMelbourne area.2 Elsewhere in the country the impact of ticks may be lessovert, however they are far from benign, with a growing recognition of theimportance of tick-borne diseases.

We will delve into the leaf litter to take a look into the world of paralysisticks and the impact they have on dogs and cats in Australia.

73 different tick species are reported to be capable of causingparalysis .

Of the more than 900 species of ticks identified globally, only 73 species areable to cause paralysis in their hosts through the injection of salivarytoxins.3 Compared to other arachnids (ticks are more closely related tospiders than to fleas with which they are often unjustly lumped!), this is apaltry subset, with about 99% of the approximately 47,000 recognised speciesof spiders being venomous.3 Speaking of venom, why do we say that a spider hasvenom, and yet ticks are relegated to the more general term of toxin?According to the Australian Academy of Science4, a venom is a toxic substancethat has evolved for a specific purpose and is actively injected via a bite orsting. Well tick toxin is most certainly transmitted by a bite – is it deniedthe right to be called a venom because, like nipples on men, it lacks apurpose? Well it is not my place to question evolution, but when it comes tothe role of paralysis toxins produced by ticks, who benefits? The benefit ofthe toxin to the tick is not clear. It has been suggested thatparesis/paralysis may be beneficial in helping to inhibit grooming by the hostto allow the tick to feed, although given paralysis only occurs days afterinitial attachment and the beginning of feeding, this seems questionable.Perhaps paralysis is an unintended consequence of molecules evolved for someother purpose. We may never know, but it is fun to speculate and regardless ofwhether you call it a toxin or venom, it is not a good thing to be exposed to!

Of the 73 tick species capable of causing paralysis, the eastern paralysistick is hands down the undisputed champion when it comes to disease severity,with a single adult female tick capable of causing death in a dog or cat.Paralysis is associated with the production of salivary holocyclotoxin, ormore accurately holocyclotoxins, as recent research has identified a family ofalmost 20 related molecules that may act together in varying ratios to causeclinical disease.5

3 different hosts are needed for the eastern paralysis tick to completeits lifecycle.

Although it may take a village to raise a child, it takes only three hosts toraise a paralysis tick to adulthood. Whilst all ticks are obligate parasites,spending at least part of their lifecycle on a host, they differ in just howreliant they are. The lifecycle of ticks, like other arthropods, consists offour life stages; eggs, larvae, nymphs and adults. Tick lifecycles in generalare categorised based on the number of free-living stages that feed on a host;either one-, two-, or three-host ticks. In case you are wondering, you can’thave a four host tick as eggs come with their own ready source of nutritionand so don’t need a host to feed on! Paralysis ticks, like other hard ticks,are three-host ticks. You may be thinking that as a three-host tick, I.holocyclus would spend most of its time on a host, however, of a lifecyclethat may be up to a year in duration, only three to six weeks are actuallyspent living on a host (with the remainder spent in the moist leaf litter orthe nests of hosts).6 Speaking of hosts, I. holocyclus has a broad hostrange, being reported on a range of mammalian and avian hosts, however nativebandicoots (primarily the northern brown bandicoot and the long-nosedbandicoot) are considered the primary host.6

There is generally a single generation of I. holocyclus ticks per year, andas a result there is marked seasonality to the prevalence of different lifestages.6 As mentioned earlier, it is the feeding adult female ticks that areprimarily responsible for the development of clinical signs. The lifecycle ofthe tick therefore explains the seasonality of clinical cases of tickparalysis, with spring and summer associated with a greater relative abundanceof adult ticks, and therefore peak incidence of tick paralysis. It isincorrect to speak of an absolute ‘tick season’ however, as adult ticks may befound throughout the year. Additionally, although less common, clinical signsof tick paralysis have been associated with infestation with larval or nymphalI. holocyclus ticks.7

72 hours is generally accepted as the minimum time from tick attachmentto the onset of clinical signs .

A questing adult female tick will migrate to a passing host unlucky enough tomake contact, however they may not immediately attach, instead wandering abouton the host for several hours, sometimes as long as 24 hours.2 Whether due towandering or their initial point of contact, most paralysis ticks (>70%) arefound attached on the head and neck.8

Once attached the female ticks begin to feed. This is a two phase process; thefirst is a slow feeding phase that lasts a few days, followed by “the bigsip”, a rapid feeding phase that lasts 24 hours. It is during the slow feedingphase that the genes responsible for the production of holocyclotoxins areramping up, with peak toxin production associated with the rapid engorgementphase.9 Holocyclotoxins inhibit the release of a neurotransmitter resulting inparalysis. The clinical signs associated with tick paralysis include:

By the way, we talked about what adult female ticks feed on, what about themales? Well, they feed on the female ticks!

Why do these numbers matter?

The numbers above, despite being a rollicking introduction to some fun factsabout ticks, highlight some important points associated with ticks and theircontrol.

For paralysis ticks, an understanding of the lifecycle helps to understand thepeak risk periods for tick paralysis, as this coincides with peak numbers ofadult female ticks. However cases may be seen all year round, and that bringsup another number – 12. This is the number of months in the year in which theAustralian Paralysis Tick Advisory Panel recommends the use of isoxazolinebased tick control products, such as NexGard and NexGard SPECTRA, for animalsliving in or travelling to a paralysis tick area. Another key number when itcomes to paralysis ticks is 72 hours, the typical time taken from attachmentto clinical signs. This provides a window of opportunity to avoid theconsequence of ticks through two simple actions – daily tick searching by petowners and the use of an effective acaricide. The introduction of isoxazolinebased acaricides has been associated with a marked reduction in cases of tickparalysis.10 Through encouraging pet owners to be compliant, not complacentaround the use of tick control products, all-year round, it is within ourreach to drive these numbers down further.

Outside of paralysis tick areas throughout Australia, but particularly in thenorth, a change in mindset around the significance of ticks may be in order.We are fortunate that we do not have as many, or potentially as serious, tick-borne disease as seen in other parts of the world. However we do have some,with one study showing 12% of healthy client owned dogs in Queensland and theNorthern Territory were infected with one or more tick-borne pathogens.11 Therecent discovery of emerging tick-borne pathogens like Ehrlichia canis , notpreviously identified in Australia, highlights the importance of good tickcontrol throughout the country, not just on the east coast.

Previous Can Dogs Smell Cancer? Yes, they can.

Next CBD oil is a popular treatment for dogs with seizures. Here’s why.