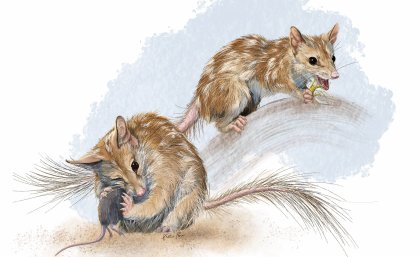 The northern quoll, one of Australia’s most adorable and endangered nativecarnivores, appears to be adapted to dramatically different landscapes – whichmay be key to the species’ survival.

University of Queensland PhD candidate Pietro Viacava co-led a study thatfound similarities between northern quoll skulls across a 5000 kilometrerange, which has raised hopes scientists will be able to cross-breed isolatedpopulations.

“Northern quolls are in danger – a lot has been thrown at them,” Mr Viacavasaid.

“They’ve been victims of a devastating cane toad invasion, increases inbushfires and habitat fragmentation, all while facing stiff competition fromother carnivores such as dingoes and cats.

“The problem we are facing with conserving the northern quoll is that theremay be too little genetic diversity in these handful of remaining populations,scattered across Australia.

“If we cross-bred them, we might run the risk that they wouldn’t be ideallysuited to these diverse environments.

“Their skulls, for example, might not be properly adapted to eat local prey,as it differs across Australia.

“Luckily, this doesn’t seem to be the case – these quolls seem to beincredibly versatile.”

They looked for shape differences between populations, or whetherenvironmental conditions coincided with changes in skull shape.

Dr Vera Weisbecker from the Flinders University College of Science andEngineering supervised the study, and said the results appeared to be a winfor northern quoll conservation.

“Quoll skull shapes were mostly similar across their entire range, althoughthe shapes did vary with the size of the animals,” Dr Weisbecker said.

“This means, for example, that a quoll skull from Pilbara region in WA lookednearly the same as a similar-sized one from south-eastern Queensland, 5000kilometres apart.

“Although other parts of the animal’s body and genetic factors need to beconsidered, we will most likely be able to breed animals from differentpopulations for conservation without losing adaptations to feeding.”

However, there is also a much less positive potential explanation for theresults.

“Scientists have long suspected that marsupial mammals – such as quolls,kangaroos and koalas – are seriously limited in the degree to which they canadapt their skull and skeleton,” Dr Weisbecker said.

“This is because newborn marsupials require a specifically shaped snout to beable to latch onto the mother’s teat.

“In that case, what we see may actually be a serious limitation on the abilityof quolls to adapt, rather than the much more hopeful multipurpose solution wepropose.”

To further explore this possibility, the team is now looking at how closelyrelated species of antechinus – smaller quoll relatives – differ in skullshape.

Image: UQ’s Pietro Viacava with a northern quoll on the island of GrooteEylandt in the Northern Territory

Next The Latest Trends in Dog Food