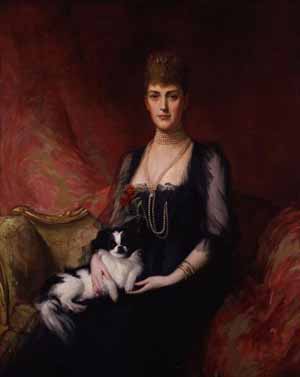 An ancient dog commonly compared to a feline in temperament, the Japanese Chinis certainly a breed worth learning about. If you’re on the hunt for a caninecompanion bred purely as a lapdog, look no further than this tiny, spiritedlittle ball of fur.

The Japanese Chin is an ancient little dog bred specifically forcompanionship. He belongs to the toy group and is small, agile, and clever.Known for his stunning coat and charming disposition, the Japanese Chin makesa wonderful companion for families with older, more respectful children,singles and seniors.

Though small, the Japanese Chin requires a certain amount of maintenance whenit comes to grooming, exercise, training and care. He can also suffer fromsome serious health concerns that potential owners should be aware of, but wewill cover that further down.

Like many ancient breeds, the Japanese Chin has somewhat of a muddy history.Some historians believe he began in Korea, but most insist his roots arederived from China. In fact, it is widely believed that the Japanese Chin andthe Pekingese (another dog that has a flat face and profuse coat) were oncethe same breed. But the Japanese Chin branched off to become his own breedwith unique and distinguishing characteristics all his own.

Notable differences include the Japanese Chin’s longer legs, less fluffy coat,and more compact body. It is believed that the first Chin dogs were given asgifts by Chinese emperors to the Japanese, who then worked to perfect thisbreed, building him into the canine we know and love today.

Like many small Japanese dog breeds, the Japanese Chin was bred specificallyfor his small size and flattened face. His coat was something of extravaganceduring his reign as a royal pup, and his only job was to serve as a loyal andloving companion.

The Japanese Chin of today remains a beloved lap dog, excelling in show andsports like agility and obedience.

What Are The Japanese Chin Temperament And Personality Traits Like?

Of course, this is part of the dog’s charm. He is a loving and friendlycompanion to his family, and becomes very bonded to his people. As such, theJapanese Chin can be prone to suffering from separation anxiety.

For this reason, the Japanese Chin will do best in homes with owners who haveflexible schedules and can devote lots of time and attention to this dog.

The Japanese Chin can get along well with children and other pets, though hewill not tolerate young children handling him too roughly. While he is aspirited and playful dog, he can be at risk of injury from larger pets or morehandsy kids, so keep this in mind.

Children should also be taught how to properly behave around pets in the hometo ensure everyone gets along happily and safely.

Due to his small size and attentive nature, the Japanese Chin makes anexcellent addition to families who live in apartments or smaller spaces. Itdoes not take much to make sure his exercise needs are met, and he will enjoyspending most of his time snuggled on your lap or at your feet.

This is a dog who is also often compared to a feline in his meticulous habits.Of course, one can’t blame this dog for his prideful nature, considering hewas bred and raised by royalty.

What Are The Exercise and Training Requirements For A Japanese Chin?

Though the Japanese Chin is small and rather content lounging around whereverhis humans are, that is not to say he does not require routine exercise. He isan active dog who will still enjoy a walk once a day, though it doesn’t needto be long or brisk.

A slow, routine stroll through the neighborhood should suffice, with lots ofsniff time and exploring at a leisurely pace. The Japanese Chin will alsoenjoy playtime at a dog park with other dogs his size, or romps with othersmall doggy companions in a backyard, so long as the play is gentle and on hisown terms.

That said, this is a dog who is highly stubborn and has been known to have“selective hearing”. For this reason, it’s best to always walk your JapaneseChin with a leash and harness to ensure he stays safe and with you.

Socialization and training at an early age is a must when it comes to theJapanese Chin, especially considering that this tiny dog can be prone tostubborn behaviors. The Japanese Chin can also be standoffish with strangersand prone to anxiety, so it’s important to try and socialize him early to helpease these anxious behaviors.

To properly socialize your Japanese Chin, it’s wise to introduce him to asmany new people, places and experiences as possible. Try to ensure theseexperiences are positive for your Chin, and never force him into an experiencethat obviously frightens him.

When training your Japanese Chin, be patient and use lots of positivereinforcement. This is a dog who, while stubborn, is still eager to please andwill enjoy fun training sessions that are kept short and interesting.

Avoid punishing or scolding your Chin during training, as he will quickly shutdown and become uninterested.

You can read much more at https://yourdogadvisor.com/japanese-chin/