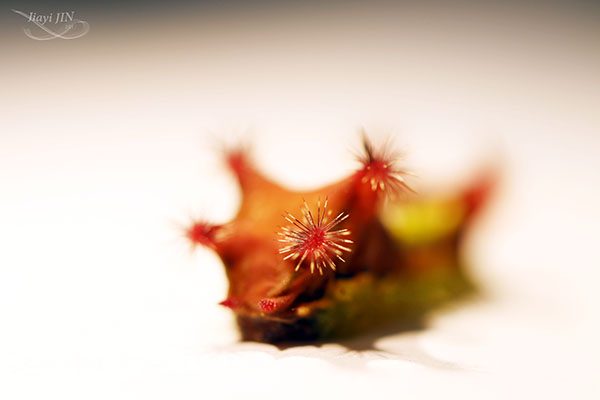 University of Queensland researchers have discovered the venom of acaterpillar, native to South East Queensland, shows promise for use inmedicines and pest control.

The Doratifera vulnerans is common to large parts of Queensland’s south-eastand is routinely found in Toohey Forest Park on Brisbane’s southside.

Dr Andrew Walker from UQ’s Institute for Molecular Bioscience has beenresearching the striking looking caterpillar since 2017.

“We found one while collecting assassin bugs near Toowoomba and its strangebiology and pain-causing venom fascinated me,” Dr Walker said.

Unlike The Very Hungry Caterpillar that charmed generations of childrenaround the world, this caterpillar is far from harmless.

Dr Walker’s research found the caterpillar has venom toxins with a molecularstructure similar to those produced by spiders, wasps, bees and ants.

The research also unlocked a source of bioactive peptides that may have usesin medicine, biotechnology or as scientific tools.

“Many caterpillars produce pain-inducing venoms and have evolved biologicaldefences such as irritative hairs, toxins that render them poisonous to eat,spots that mimic snake eyes or spines that inject liquid venoms,” Dr Walkersaid.

“Previously researchers had no idea what was in the venom or how they inducepain.

“We found that the venom is mostly peptides and shows stunning complexity,containing 151 different protein-based toxins from 59 different families.”

The researcher team synthesized 13 of the peptide toxins and used them to showthe unique evolutionary trajectory the caterpillar followed to produce pain-inducing venom.

“We now know the amino acid sequences, or the blueprints, of each protein-based toxin,” Dr Walker said.

“This will enable us to make the toxins and test them in diverse ways.”

Some peptides already produced in the laboratory as part of Dr Walker’sresearch showed very high potency, with potential to efficiently kill nematodeparasites that are harmful to livestock, as well as disease-causing pathogens.

“Our research unlocks a novel source of bioactive peptides that may have usein medicine, through an ability to influence biological processes and promotegood health,” he said.

“First, we need to work out what the individual toxins do, to inform us abouthow they might be used.”

Dr Walker is a researcher in the lab of Professor Glenn King who studiesvenoms-based drug discovery. The findings of this study, which is published inthe Proceedings of the National Academy of Sciences of the USA (DOI:10.1073/pnas.2023815118) incorporate work from researchers at the CSIRO,Canada’s York University, Austria’s University of Vienna and the Department ofFood and Agriculture in the US.

Previous Success: Just Do It. Then Do It Again, and Again and Again

Next Take Your Dog to Work Day