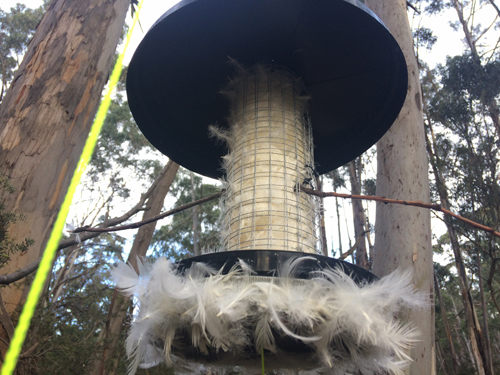 Researchers have found a way to help one of Australia’s rarest birds ‘self-fumigate’ or safeguard their nests, to protect their young from deadlyparasites.

However, parasitic flies (Passeromyia longicornis) are attracted to these cozynests. When the eggs of the pardalotes hatch, the fly maggots burrow into theskin of the baby birds to feed on their blood.

The parasite is killing nine out of every 10 chicks in some areas according toPhD researcher Ms Fernanda Alves, from the Research School of Biology at TheAustralian National University (ANU).

“This species has already suffered major population declines due to habitatloss. This parasite could now lead to the extinction of this unique species ifnothing is done,” Ms Alves said.

The research team, which is part of the Australian Government’s NationalEnvironmental Science Program, has found a clever way to help the birds tofumigate their own nests.

“Pardalotes spend a lot of time looking for bird feathers to build their nestswith, so we decided to make use of this natural instinct to get insecticideinto nests.”

“The results were fantastic. Birds took the treated feathers back to theirnests and as a result 95 per cent of the chicks survived – whereas those thatused untreated feathers had only an eight per cent survival rate,” she said.

“Finding stray feathers on the forest floor is hard work. The featherdispensers gave the pardalotes a hand with nest building and fixed their flyproblem.

“These feather dispensers provide us with a very cheap and effective way toimprove nest survival of forty-spotted pardalotes.

“These birds are endangered by loss of habitat, and we are thrilled to have anew tool that ensures that in the areas where these birds still survive, theycan still produce enough offspring to hopefully prevent extinction.”

The research has been published in the scientific journal _AnimalConservation. _

The study was supported by the Australian Government’s National EnvironmentalScience Program, The Holsworth Wildlife Research Endowment & The EcologicalSociety of Australia, BirdLife Australia, the Mohamed bin Zayed SpeciesConservation Fund, and the ANU Research School of Biology.

Previous How many animals is too many?

Next How to eat like the animals for good health