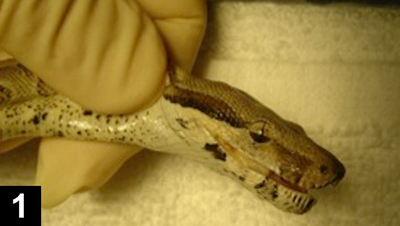 The key to safe, appropriate restraint of reptiles is having a basic knowledgeof the behavior of the patient’s species and the temperament of the individualanimal.

Most reptiles possess a defensive rather than offensive attitude when feelingthreatened. They can be very perceptive of their environment and can even formbonds with owners, so it is important to provide a calm, nonthreateningenvironment. Loud noises, sudden movements, noxious smells (eg, lotions,perfumes), and table vibrations are examples of environmental stimuli that mayadversely influence a reptile’s behavior in the practice.

Do not grab a reptile from its transport enclosure immediately upon arrival.Take the time to perform a hands-off examination first to allow the patient tobecome familiar with its surroundings.

The first rule of reptile restraint is to know the animal’s defense systems.Regardless of species, make sure all reptiles are fully supported while beingrestrained to make them feel more secure.

A snake’s main defense system is its bite and ability to constrict. Keep inmind that snakes have incomplete tracheal rings, so when restraining the headand neck, one must be careful not to collapse the trachea. Venomous speciesshould strictly be handled by those with training and experience.

The first rule of reptile restraint is to know the animal’s defensesystems.

Most snakes have a keen sense of smell and are able to detect a remnant ofprey species on a handler’s hands. Wash your hands thoroughly before handlingsnakes, especially if you were previously working with small mammals.

Wearing gloves can also help mask mammal smells that may cause a snake tostrike. Although it is common practice to immediately restrain a snake’s head,this may not be necessary in mild-mannered animals; for example, ball pythonsand corn snakes can usually be restrained by simply supporting their bodieswith both hands. Therefore, it is important to know the species as well as theindividual patient.

Constrictor species may be more likely to strike, followed by an attempt toconstrict around the handler’s arms or neck. These species are best handled bycontrolling the head first, followed by supporting the body.

Two techniques can be used to restrain the head. One is to place the thumb onthe ventral mandible while the fingers are placed on top of the head, usingthe pinky finger to support the neck. This technique may be better suited tolarger, more active snakes.

The second, which is useful for smaller or more docile snakes, is to simplyhold the head or neck from the sides without exerting pressure on the dorsalor ventral aspects ( Figure 1 ). In larger constrictors, a firmer grip maybe required.

Figure 1. It is possible to restrain a snake by holding the neck from thelateral aspect with the thumb and forefinger. This technique applies little tono pressure to the trachea. This snake had obvious stomatitis, which wouldrequire debridement of the area and lead to direct exposure to bacterialand/or fungal organisms; hence gloves are worn. 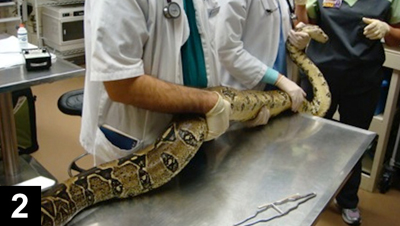 Figure 2. A large constrictor snake’s body is supported by an examinationtable and 3 handlers. Notice that the head is loosely restrained by wrapping ahand around the neck. This technique can be safe in mild-mannered animals buthandlers should always be vigilant. Because the snake was about to undergo atrans-tracheal wash, which often results in exposure to fluid-containingbacterial organisms, gloves are recommended to minimize exposure topathogens.

A good rule for personnel safety is to have 1 team member available for every3 to 4 feet of snake ( Figure 2 ). This also ensures the snake feelsadequately supported.

Most lizard species are unlikely to bite during an examination, with 2exceptions: green iguanas and some monitor lizards. Green iguanas can bite,claw, and use their tails to inflict potentially serious injury. Monitors aremore likely to bite. Protective gloves (ie, welding gloves or gauntlets) and atowel can be used to safely restrain these lizards. Place the towel over thelizard’s head and block its view, which will allow the handler to quickly holdthe neck and body to secure the animal.

Green iguanas have tail autotomy and should not be handled by their tails,which can break off in a natural plane designed to escape predators. Althoughthis is not harmful, it is unpleasant for both the patient and client.

Chelonians are generally shy, defensive animals and are unlikely to bite, withsliders, snapping turtles, and soft-shell turtles the exception. Snapping andsoft-shell turtles can stretch their necks up to half the length of theirshells; therefore, handle these species from the rear third of the body,controlling the head if possible (Figure 7). 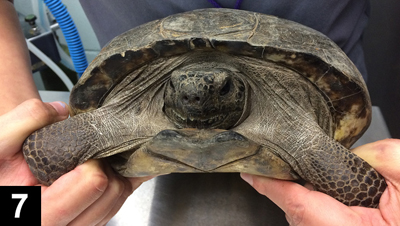 Figure 7. A soft-shell turtle’s head is restrained for a simple physicalexamination by grasping its neck with a full hand while the body rests on atable for support. This species is prone to biting and the long necks canreach up to 50% of the length of the carapace; therefore, head restraint isessential for safety. Notice that the front limbs can grasp the table edge,which may allow the animal to attempt escape by pushing against the table. Thehandler must be aware of this and support the body to prevent an accidentalfall. Gloves are worn because the animal was covered in mud.

Tortoises are less likely to bite, but will retract into their shells whenthreatened, which can injure human fingers trapped inside the shell space.

Crocodilians can inflict serious injury and their bite can lead to local orsystemic wound infection, so restraint is better left to those withexperience. The author recommends that one team member be available for every3 feet of animal when restraining crocodilians in a practice setting.

Author’s note: It is extremely important that any veterinary teammember handling reptiles wash his or her hands before handling reptiles (toprevent cross-contamination across patients) and after (to prevent spread ofzoonotic diseases and cross-contamination to other patients). Hands shouldalso always be washed after working with any animal, even when the handlerwears gloves. Research has shown that wearing gloves can give the handler afalse sense of security, and wearing gloves alone is not sufficient todecrease microbial contamination, and using good hygiene (ie, hand-washing) isscientifically sound. 1-3 Of course, any immune-compromised handler shouldwear gloves as extra protection.

Next Home-Based Businesses Turn Lemons Into Lemonade – and Tax Deductions