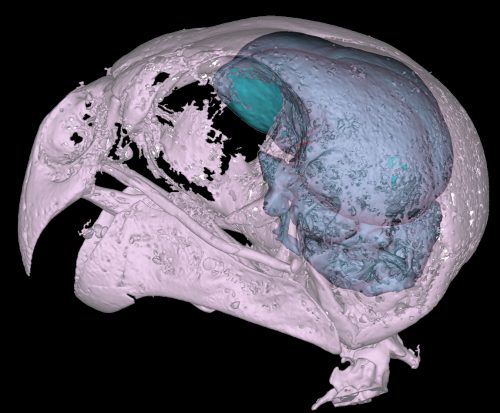 Australia’s most elusive bird, the night parrot, may not be as good at seeingin the dark as its name would suggest, and not much better at seeing in thedark than daytime active parrots.

University of Queensland researchers have co-led an international study whichhas revealed the critically endangered parrot’s visual system is not as well-adapted to life in the dark as would be expected for a nocturnal bird.

UQ’s Centre for Advanced Imaging and Flinder’s University researcher Dr VeraWeisbecker said the finding raised concerns the parrot might be adverselyimpacted by fencing in the Australian outback.

“Night parrots must be able to find their way at night – to find food, avoidobstacles while flying and escape predators,” Dr Weisbecker said.

“We therefore expect their visual system to show adaptations for seeing in thedark, similar to other nocturnal birds – frogmouths and owls with enlargedeyes for example.

“However, we found that this wasn’t the case.”

Co-author Aubrey Keirnan compared 3D reconstructions of the night parrot’sskull and brain with that of related parrot species.

“We found that the night parrot has similar eye size to other parrots withsmaller optic nerves,” Ms Keirnan said.

“It also has smaller optic lobes, which are visual processing areas in thebrain.

“This suggests that the night parrot may not be great at seeing in the dark –its vision is likely sensitive but with poor resolution, so that it might notbe good at distinguishing obstacles like wire fences or even predators in darkconditions.” 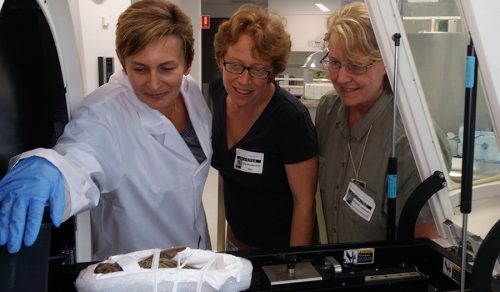 The findings raise questions about the night parrot’s ability to survive withlow numbers in remote outback Australia where fencing is important for stockmanagement and predator exclusion.

Dr Andrew Iwaniuk from The University of Lethbridge in Canada said the use ofanatomical observations to infer the species’ behaviour was an innovativeapproach to understand a species so rare it was considered extinct for most ofthe 20th Century.

“The species is so elusive that we do not even know how many individuals areleft,” he said.

“To conserve the species, it is critical that we understand its behaviouralneeds and capabilities but these are nearly impossible to observe.”

The Queensland Museum bird collection was an important research resource withco-author and collection manager Heather Janetzki providing the night parrotspecimen along with several other species for this comparative study.

Dr Weisbecker said the research team was lucky to have the specimen – found in1990 by Australian Museum bird expert Dr Walter Boles.

“The results of the study suggest that removal of unused fences should be apriority in areas where night parrots are known to occur,” Dr Weisbecker said.

“However, we probably can’t go entirely without fences – stock needs to bemanaged with fences, and some forms of predator exclusion could be importantfor protecting the night parrot.

“We therefore need to be very careful with our fencing strategies, at least byincreasing the visibility of wire fences, but alternatives such as low-tensionelectric fencing could be even better.”

Images above: (L-R) Dr Karine Mardon, Dr Vera Weisbecker with QueenslandMuseum’s Heather Janetzki getting ready to scan a night parrot specimen; Aninternal scan – or, endocast – of the inside of a night parrot’s head.

Previous Thinking about inviting a new bestie into the family