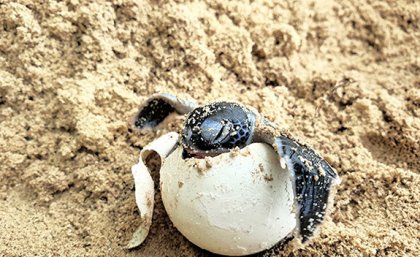 “In 2018, scientists revealed that more than 99 per cent of green turtlesbeing born in the northern Great Barrier Reef are female,” Dr Booth said.

“The incubation temperature of eggs determines the sex of sea turtles, with awarmer nest resulting in more females.

“Rising temperatures, caused by climate change, is to blame for the lack ofmale hatchling production.

“This is highly problematic for the future of one of the largest green turtlepopulations in the world – if we reach a situation where no males are beingproduced then the northern Great Barrier Reef population of green turtles willgo into a rapid decline.

The project has been investigating shade structures and freshwater or seawaterirrigation, as possible ways to cool turtle nests to generate male turtles.

“So we conducted research on Heron Island in the 2019-20 nesting season,determining if seawater could cool nests without dehydrating embryos.”

Nests were given a one-off application of either 50 litres of seawater or 50litres of freshwater, equal to about 100-120 millimetres of rain, whilecontrol nests received no irrigation.

Both the seawater and freshwater-treated nests saw an immediate 1.3 degreesCelsius drop in temperature which lasted four days, while control nesttemperatures remained constant.

“Despite our concern about dehydration, the seawater-treated nests wereactually more successful than the control nests.

“Seawater now needs to be trialled on a larger scale at other rookeries, likeRaine Island, that are in critical need of male production.”

The study found that seawater irrigation was worth further investigation, as away to ensure at least some males are being produced to buy turtles some time.

The research has been published in Marine Ecology Progress Series (DOI:10.3354/meps13721).

Funding of $1.5 million has been provided by furniture company Koala to WWF-Australia, a part of which is helping fund this project.

The project was a collaboration between UQ, Koala, the World Wide Fund forNature-Australia and the Conflict Island Conservation Initiative.