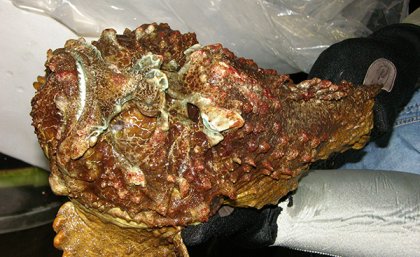 University of Queensland scientists working to unlock the mysteriesAustralia’s deadly stonefish have made a discovery which could change howsting victims are treated in the future.

Stonefish are the most venomous fish in world and are found throughout shallowcoastal waters of the northern half of Australia.

Study co-author Associate Professor Bryan Fry said previous studies have notbeen able to uncover all of the mechanisms at play in stonefish venom becauseof the way the venom was tested.

“But we’ve discovered a big one – labs were previously analysing only freeze-dried venom, as the venom is often dried in order to make it more stable fortransportation and storage.

“By testing freshly milked venom our analysis revealed that the process offreeze-drying destroys paralytic neurotoxic activity of the sample, a keyactivity we’re observing.

“This means there’s a possibility that current antivenom may not fullyneutralise the paralytic effects in human stonefish envenomation, but thisdefinitely needs more study.

“We’d also like to strongly emphasise that the paralytic effects arehistorically not the dominant lethal effect of the venom and in some casesdon’t even manifest.

He said the research showed that the neurotoxic effects of stonefish venomblocks the heart’s smooth muscle nerve receptors, which leads to an alterationof the heart’s rate and rhythm.

“Intriguingly, the venom works in a similar way to venom of the nerve-blockingdeath adder – a dangerous Australian snake,” Mr Harris said.

Dr Fry said the research was only possible thanks to new advanced automatedand robotic equipment at UQ’s Australian Biomolecular Interaction Facility(ABIF) established by major funding from the Australian Research Council.

The facility has the only machine in the southern hemisphere capable ofconducting binding kinetic experiments in such a high throughput manner.

“We’ve only been able to uncover the inner workings of stonefish venom thanksto a machine known as the Octet HTX – the Rolls Royce of biomolecularinteraction technology,” Dr Fry said.

“We’re excited about what else we can do with this technology and the insightsit will offer into the world’s deadliest creatures, helping us develop world-leading treatments.”

Previous The importance of Dog Training