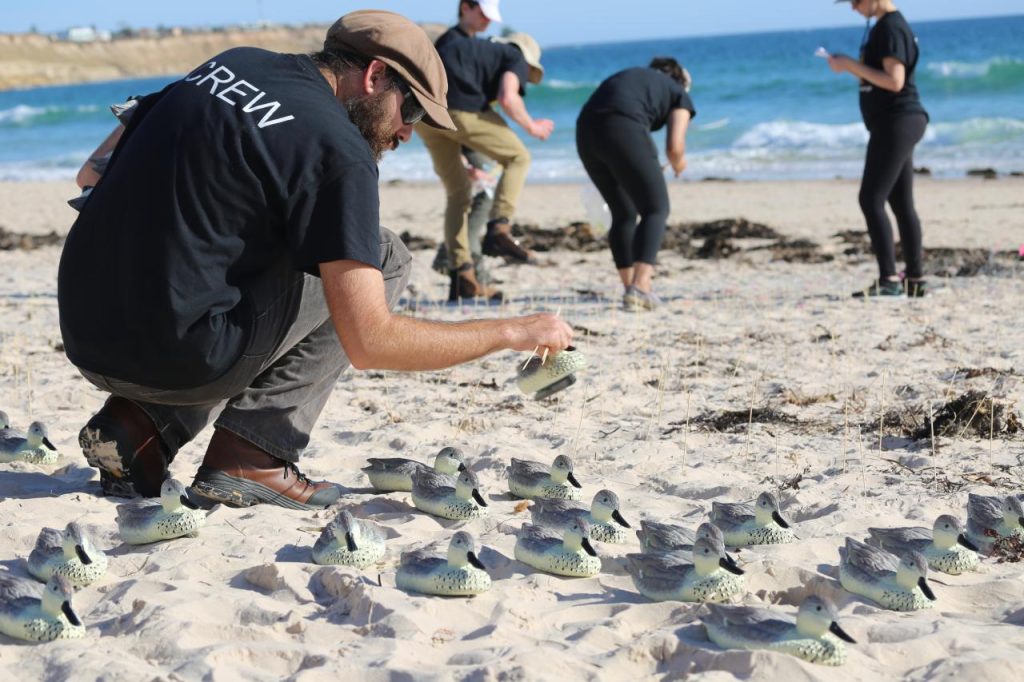 A drone image of a breeding colony of Greater Crested Terns. Researchers usedplastic bird decoys to replicate this species in an experiment that compareddifferent ways of counting wildlife.
Jarrod Hodgson, CC BY-ND

Ecologists from the University of Adelaide in South Australia test theaccuracy of drones to count wildlife.

Ecologists are increasingly using drones to gather data. Scientists have usedremotely piloted aircraft to estimate the health of fragile polar mosses, tomeasure and predict the mass of leopard seals, and even to collect whale snot.Drones have also been labelled as game-changers for wildlife populationmonitoring.

But once the take-off dust settles, how do we know if drones produce accuratedata? Perhaps even more importantly, how do the data compare to those gatheredusing a traditional ground-based approach?

To answer these questions we created the #EpicDuckChallenge, which involveddeploying thousands of plastic replica ducks on an Adelaide beach, and thentesting various methods of tallying them up.

As we report today in the journal Methods in Ecology and Evolution, drones doindeed generate accurate wildlife population data – even more accurate, infact, than those collected the old-fashioned way.

JarrodHodgson standing in one of the replica colonies of seabirds constructed forthe #EpicDuckChallenge.
S. Andriolo

Assessing the accuracy of wildlife count data is hard. We can’t be sure of thetrue number of animals present in a group of wild animals. So, to overcomethis uncertainty, we created life-sized, replica seabird colonies, each with aknown number of individuals.

From the optimum vantage and in ideal weather conditions, experienced wildlifespotters independently counted the colonies from the ground using binocularsand telescopes. At the same time, a drone captured photographs of each colonyfrom a range of heights. Citizen scientists then used these images to tallythe number of animals they could see.

Counts of birds in drone-derived imagery were better than those made bywildlife observers on the ground. The drone approach was more precise and moreaccurate – it produced counts that were consistently closer to the true numberof individuals. 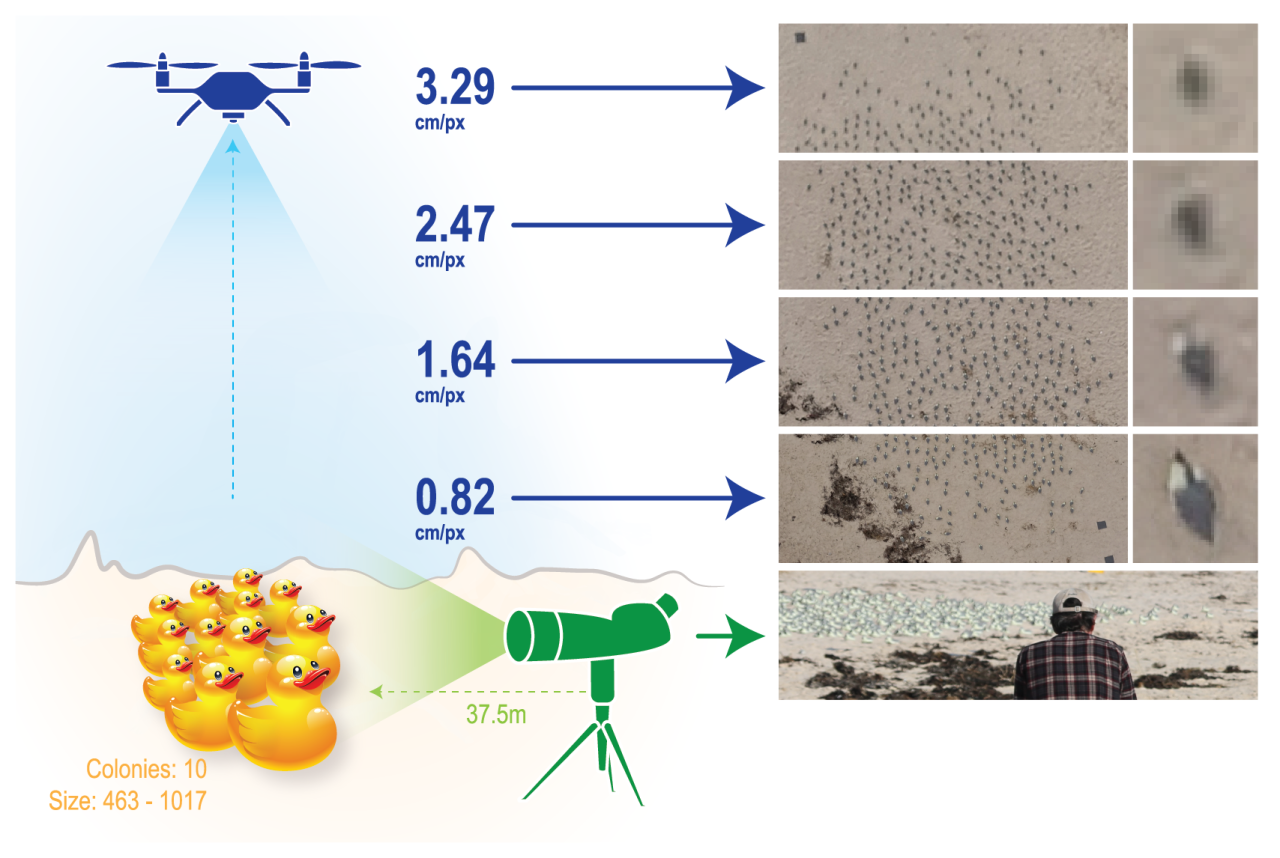 The difference between the results was not trivial. Drone-derived data werebetween 43% and 96% more accurate than ground counts. The variation was due tohow many pixels represented each bird, which in turn is related to the heightthat the drone was flown and the resolution of the camera.

This wasn’t a surprise. The experienced ground counters did well, but thedrone’s vantage point was superior. Observing photos taken from above meantthe citizen scientists did not have to contend with obscured birds that oftenoccur during ground counts. The imagery also benefited the citizen scientistsas they could digitally review their counts as many times as they needed. Thisreduced the likelihood of both missing an individual and counting anindividual more than once.

Thescientists were assisted by many volunteers, without whom the

EpicDuckChallenge would not have been possible.

However, even though it proved to be more accurate, making manual digitalcounts is still tedious and time-consuming. To address this, we developed acomputer algorithm in the hope that it could further improve efficiencywithout diminishing data quality. And it did.

We delineated a proportion of birds in each colony to train the algorithm torecognise how the animal of interest appeared in the imagery. We found thatusing 10% training data was sufficient to produce a colony count that wascomparable to that of a human reviewing the entire scene.

This computerisation can reduce the time needed to process data, providing theopportunity to cut the costs and resources needed to survey wildlifepopulations. When combined with the efficiencies drones provide for surveyingsites that are hard to access on foot, these savings may be considerable.

Using drone monitoring in the field

Our results have important implications for a range of species. We think theyare especially relevant to aggregating birds, including seabirds likealbatrosses, surface nesting penguins and frigatebirds, as well as colonialnesting waterbirds like pelicans.

Other types of animals that are easily seen from above, including hauled-outseals and dugongs, are highly suited to drone monitoring. The nests or tracksof animals, such as orangutans and turtles, can also be used to inferpresence.

Additional experiments will be useful to assess the ability of drones tosurvey animals that prefer to stay hidden and those within complex habitats.Such assessments are of interest to us, and researchers around the globe, withcurrent investigations focused on wildlife such as arboreal mammals andcetaceans.

We are still learning about how wildlife react to the presence of drones, andmore research is required to quantify these responses in a range of speciesand environments. The results will help to refine and improve drone monitoringprotocols so that drones have minimal impact on wildlife. This is particularlyimportant for species that are prone to disturbance, and where close proximityis not possible or desirable.

The world is rapidly changing, with many negative outcomes for wildlife.Technology like drones can help scientists and managers gather data fastenough to enable timely assessment of the implications of these changes.

When monitoring wildlife, increasing the accuracy and precisionof animal surveys gives us more confidence in our population estimates. Thisprovides a stronger evidence base on which to make management decisions orpolicy changes. For species and ecosystems threatened with extinction orirreparable damage, such speedy action could be a literal lifeline.

_This article was originally published onThe Conversation. Read the originalarticle. ___