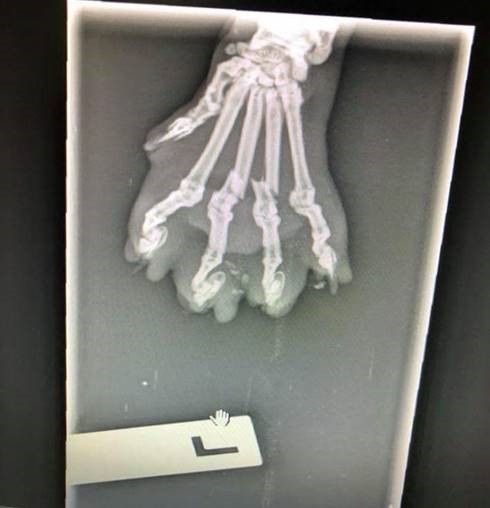 A 21-year-old Chippendale man who pleaded guilty to two counts of animalcruelty was convicted and sentenced in Downing Centre Local Court on 1 July2019 in relation to offences committed against his then-girlfriend’s two-year-old male Ragdoll cat, Hibala.

The first offence related to an incident when, apparently jealous of theattention she was providing the cat, he threw Hibala down a seven-storeygarbage chute, which ultimately resulted in the cat losing most of his tail.

In an agreed fact document tendered on sentence, the Court heard that onFriday 27 April 2018, Hibala was found stuck in the bottom of the garbagechute of the apartment building in which the couple lived. Hibala had beenleft in the man’s care, and when the pair returned home at 7:30 p.m. thatnight they found Hibala missing.

A vet determined that Hibala had a fractured tail, open lacerations exposingthe bone in his tail, matted fur on his body, and missing fur and severeinflammation around his tail area. The vet concluded that two-thirds ofHibala’s tail was necrotic and non-viable and required removal to give the cata chance of survival. It was removed, and after four days in hospital careHibala was sent home with a treatment plan.

In relation to that offence, the defendant was convicted and fined $3000, andplaced on a two-year community corrections order.

The second offence occurred between 9 and 23 June 2018, whilst Hibala’s ownerwas overseas. In a photo she requested from the defendant, she noticed aninjury on Hibala’s nose. She asked the defendant to take the cat to a vet, butafter he refused, a friend of hers collected the cat and took him to a vet.Hibala was found to have a severe wound with fractured bones in his front leftpaw, and minor injuries to his eye, ear and nose.

Surgery was required to remove the dead, damaged, infected tissue around thecat’s paw. He spent six days in hospital care where he was administered painrelief, antibiotics and bandage changes.

In relation to that matter the defendant was convicted, fined $3000, andordered to complete a three-month intensive corrections order.

The prosecution applied for and was granted an order prohibiting the defendantfrom purchasing, acquiring, and taking possession or custody of any animal for10 years.

RSPCA NSW Chief Inspector Scott Meyers commented on the distressing nature ofthis case, saying, “Hurting an animal out of pure jealousy, one that belongsto and is loved by your partner no less, and letting it suffer over aprolonged period of time is a shocking display of callousness.”

Hibala was discharged to his owner after she returned from her overseas tripand they moved into a new apartment without the defendant.

Next Walmart is getting out of the pet fish business.