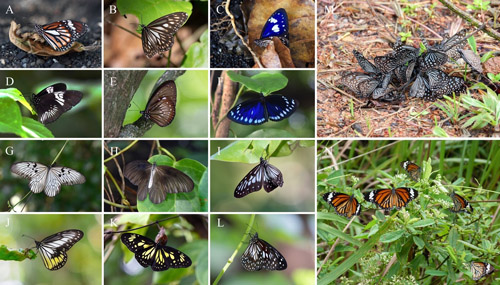 Charles Darwin and Alfred Wallace are only right most of the time. Abutterfly’s behaviour towards members of their own subfamily ( Danainae ) isamong the latest discoveries that raises questions in insect evolutionarytheory.

Caterpillars are the larval stage of butterflies and moths.

Caterpillars feed on toxic plants, sequestering chemicals for self-defence.The chemicals are noxious and unpalatable to predators, such as birds, and arelater manifested in butterflies’ bright, warning colours.

These chemicals also help male butterflies produce mating pheromones, whichfunction as nuptial ‘gifts’ to females during courtship. To build upon thisinnate toxicity, male butterflies supplement their diet by seeking outadditional sources of chemicals. Most frequently, these are obtained throughplant sources, but in the forests of North Sulawesi, Indonesia, it appearsthat they have developed a taste for caterpillars – all in their quest toincrease their supplies of this love drug, the researchers posit.

“This is the first time the behaviour has been reported,” said lead author,PhD candidate Mr Yi-Kai (Kai) Tea from the University of Sydney School of Lifeand Environmental Sciences.

“The behaviour does not fit neatly in the traditional modes of predation,parasitism, or mutualism, and so presents a new challenge to evolutionarytheory. We have coined it ‘kleptopharmacophagy’ – chemical theft forconsumption.”

Ecology’s The Scientific Naturalist has published the research.

Drinking from ‘wounded and oozing’ caterpillars

To supplement the chemical supplies they obtain as caterpillar juveniles, thebutterflies engage in a behaviour known as “leaf-scratching”. “They damage[chemical containing] plants with their sharp tarsal claws, liberate plantjuices and imbibe them using their long, curly tongues,” said Mr Tea.

Scratching at live caterpillars, however, had never previously been reported.“Caterpillars are essentially bags of macerated leaves; the same leaves thatcontain these potent chemicals the milkweed butterflies seek out. To adultbutterflies, they may simply be an alternative source of chemicals on which tofeed,” said Mr Tea.

Mr Tea observed this unusual behaviour with colleagues in 2019, where, in thecoastal forests of North Sulawesi, he observed adult male milkweed butterfliesscratching at both leaves and live and dead caterpillars and apparentlyimbibing their juices. “The caterpillar larvae would contort their bodiesrapidly in what appeared to be futile attempts to deter the scratching,” hesaid.

While milkweed butterflies have been documented to feed on carcasses of otherchemical-containing insects, this is the first time the behaviour has beenreported extending onto living insects of the same order; in this case, theirown larvae. Yet, it remains unclear whether the caterpillar fatalities were adirect result of the scratching.

“Nonetheless, these simple observations raise questions about the ecology ofthese well-known butterflies, providing numerous opportunities for futurestudies,” said Mr Tea. “For example, which exact compounds are thesebutterflies interested in? Does this behavior occur elsewhere in the world?”

Next How citizen scientists are helping to restore endangered seagrass