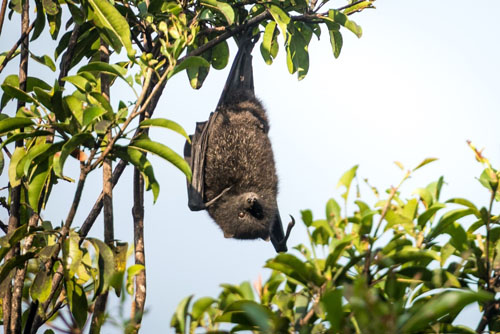 Led by the University of Sydney, a scientific team has analysed thenutritional content of Christmas Island flying foxes’ diets and found thatintroduced plant species do not provide a balanced meal.

The finding can be extrapolated to all flying foxes – also known as fruit bats– that feed on native and introduced vegetation. These include Sydney natives,the greyheaded and black flying-foxes.

With a population of just 3800, the Christmas Island flying fox ( Pteropusnatalis ) is critically endangered. The only remaining native mammal specieson the island, the fruit bat population was depleted by two-thirds between the1980s and 2007. Possible causes of population decline include human-inducedhabitat loss and alteration, invasive animal species, and cadmium poisoning.

Altered habitats are often re-vegetated, including with introduced plantspecies, like mango, banana, soursop, breadfruit, and Japanese cherry trees.Yet, as the PLOS ONE study suggests, these introduced species may pose afurther threat to the flying foxes’ survival by not meeting their nutritionalneeds. “Our findings suggest that preserving these animals’ complex foraginghabitats is key to their conservation,” said lead author, University of SydneyPhD candidate Laura Pulscher. “If they went extinct, not only would we lose anative mammal, but the local ecosystem would be devasted, as they are a keypollinator and seed disperser on the island.”

Introduced fruit not as nutritious

In 2018-19, the researchers collected and analysed 125 native and non-nativeplant samples. These samples represented the most common plants on which theChristmas Island flying fox feeds.

“Flying foxes may prefer to feed on introduced plants, as it makes it easierfor them to meet their energy requirements in a shorter amount of time. Theymay also favour these plants as some – including papaya and Japanese cherry –fruit year-round on Christmas Island, when other food may be scarce. If thishappens, flying foxes’ nutritional requirements may not be met.”

Ms Pulscher said that the flying foxes likely feed on fruit and nectar to meettheir energy requirements, and pollen and native foliage like fig leaves tomeet their protein and essential mineral needs. A diet encompassing a varietyof native food plants is nutritionally optimum.

“The study results also support the need to include analyses of animals’ dietsin conservation plans generally,” she said. “Animals that could benefit fromsuch analyses include endangered primates, like the Eastern lowland gorilla.”

Declaration: The research was supported by a Kate Barlow Award through BatConservation Trust that was awarded to the lead author, as well as a PaddyPallin Student Grant awarded through the Australasian bat society.

Previous We prefer our politicians to be dog people.