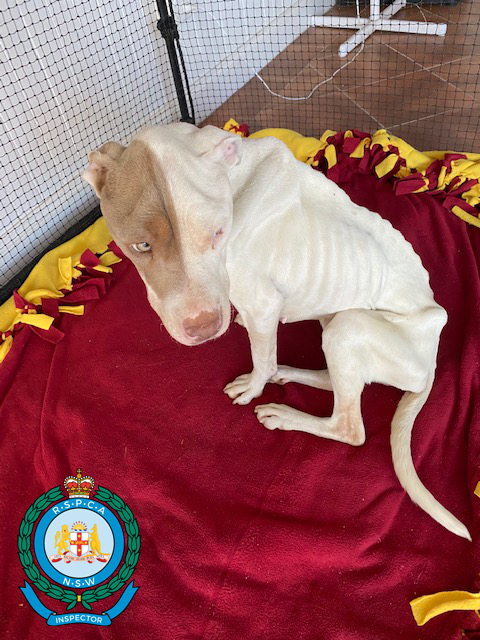 A Nelsons Plains man was convicted and sentenced at Raymond Terrace LocalCourt on 30 August 2021 after pleading guilty to multiple animal crueltycharges.

The charges include failing to provide proper and sufficient food and failingto provide veterinary treatment to his emaciated Bull Arab dog named Lila.

“Lila is the skinniest dog I have witnessed during all my days working as aninspector,” said RSPCA NSW Inspector Jarman.

“It’s a miracle she was able to make the physical recovery that she has, andthat she has found an owner committed to her long-term health and happinessafter such significant trauma.”

On 1 December 2020, the defendant’s landlord heard Lila crying from thebackyard and found her lying motionless in the sun with no food or water. Lilawas severely emaciated to the point she was unable to stand on her own.

The landlord took Lila to a local veterinarian the following day who foundthat the dog was emaciated, weighing 14.1 kg Lila was more than half thehealthy weight of a dog her age and breed.

The examining vet determined that Lila had not been properly fed for up toeight weeks.

On 6 January 2021, an RSPCA NSW inspector spoke to the defendant and observedLila, who had made improvements due to the care and veterinary assistancesought by the landlord.

The defendant confirmed he was the owner of the three-year-old Bull Arab dogand said that he had been feeding her approximately five times a week.

Magistrate Cheetham commented that the defendant’s attempts to feed his dogwere grossly unsuccessful and disqualified him from owning any animal for 5years.

The defendant was convicted, placed on an 18-month community correctionsorder, and ordered to perform 100 hours of community service.

The ownership of Lila was transferred to the landlord, who took responsibilityfor the treatment of the dog, including the significant costs associated withLila’s rehabilitation and on-going management.

“There is no excuse to effectively starve an animal who is wholly dependentupon you,” RSPCA NSW Chief Inspector Scott Meyers said.

“We implore people who are struggling to meet the basic needs of their pets toseek appropriate help, whether that is financial, mental health, or otherreasons. Cruelty of this nature is preventable.”

Images: Lila weighed 14.1 kg when she was found with no food or water and topimage Lila now.

Previous No Down Times